WHAT'S NEW AT OUR PLACE!
Click on your choice below!

ANADARKO, OK, October 1, 1998. - There is an unusual amount of traffic at the corner of 6th and Virginia Streets in Anadarko lately. Passersby stop and gawk at some unusual building going on there. The Housing Authority of the Apache Tribe of Oklahoma has embarked on one of a series of projects with alternative materials and building methods designed to provide affordable housing, cut construction costs, and provide more square footage for the same money. The main material they are using is styrofoam panels, covered with a substance known as monocrete which adheres to the styrofoam, has a surface effect much like stucco, and strengthens and protects the basic material.

While styrofoam has been tried by other developers as a construction material, the authority is using methods designed to resolve problems discovered in these earlier attempts. The foundation of these houses, made of concrete, raises the house above ground level and prevents dampness from forming in the walls. The walls are further strengthened with steel rods and I-beams, and the base is covered with a netting of steel before the monocrete covering is applied. The method provides for rapid construction, allowing a house to be built in about 30 days, at a minimum cost. The prototypes are being constructed at about $35 per square foot, but with economies of scale, the cost will go down further.

Walls built by this method provide for excellent insulation of at least an R25 value, stopping heat or cold from passing through walls and reducing costs for energy. Noise and drafts are also blocked by these methods, as is moisture. The nearly seamless construction means there is no fear of rot or insect infestation for the homeowner. These methods are also environmentally friendly, decreasing deforestation and producing no pollutants for air and water in the area. The authority is incorporating extraordinary security features as well.

Housing Authority spokesperson Dusty Miller expressed their hope that this construction method will prove to be a giant step for Indian and other low income housing. Homes like these should be attractive, economical, require little or no maintenance, and provide safe, clean, comfortable residences. Some photos of the construction in progress on the prototype houses are available at the authority's Web site (http://www.apachehousing.org), with dates showing the speed with which the houses can go up as well as the progress made on the prototypes. (SEE PHOTOS BELOW)

The photos below cover a few days at a time. Earlier photos may be seen on the Photo Archives pages.

VISION BECOMES REALITY FOR APACHE TRIBAL HOUSING - ALL TRIBES TO BENEFIT
Presentation of a check for $974,728 to the Apache Tribal Housing Authority 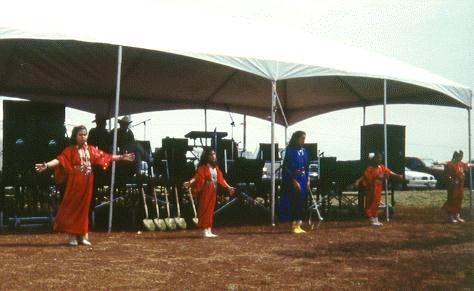 ANADARKO, OK - A groundbreaking celebration on Wednesday, July 1, 1998 begins construction for a project that had its beginning in lost dreams, broken promises, and deep disappointment. In the early 90's the Housing Authority of the Apache Tribe of Oklahoma lost funding for a low-income housing project when Congress cut the budget and bids for construction of the project came in too late and too high.

"The only thing saved from the lost project was a piece of land", says Duke H. Tsoodle, Executive Director of the Authority. The battle had only begun with the loss of the project. Three years of frustration followed: the Housing Authority was not funded for the last round of Mutual Help low-income housing in 1997, they were not successful applicants for the last round of HOME funds and the waiting lists for all types of housing increased to over 200 families. With just a hope and a prayer, the Housing Authority applied to USDA - Rural Development for a Section 515 Rural Rental Housing Loan. There would be monies for one loan under this program in the entire state for 1998 and there had never been a Housing Authority as an applicant.

Today Charles P. Rainbolt, State Director, USDA Rural Development, presented a check for $974,728 toward the $1,047,575 project and approved 24 units of Rental Assistance for very low and low income elderly and disabled tribal members. The apartment complex will be called Koon-Kah-Na-I-Sha 'Apache Camp' and will be managed by the Housing Management Department of the Housing Authority. The success of the Apache Tribe in this comeback should offer encouragement to the other 557 federally recognized tribes and 200 Housing Authorities across the nation.

"Koon-Kah-Na-I-Sha is an extraordinary project," said Rainbolt, "The Apache Tribe worked very hard to make this project a reality and Rural Development is proud to forge this partnership with the Tribe and Housing Authority." The project contains twenty-four one and two-bedroom units of housing for the elderly and disabled. The complex will also house a community center which will become the Apache Center For Creative Living. Within the center the residents, family and friends can enjoy planned activities, gatherings, and continued education from the satellite link with educational facilities. Tenants will also enjoy a petting zoo, gardens and a greenhouse. Residents can look forward to growing plants that will be used to beautify the grounds of the complex.

Another "first of a kind" feature of this development will be a petting zoo. The zoo is the result of a partnership between the authority and the Little River Zoo in Norman, OK, plus private donations. The zoo will provide small animals on a rotating basis. These "at-risk babies" will be given special attention and cuddling by the tenants of the center. Seed funds for the zoo came from McClain County Bank through Sharon Wise, tribal lending specialist, and private donations. Ms. Wise will present a check during the groundbreaking ceremony.

Wayne Sims, Administrator, Office of Native American Programs for HUD, states "This development exemplifies what a true 'partnership' is all about. In 1996, Congress enacted the Native American Housing and Self-Determination Act which allows tribes to make their own decisions concerning housing, instead of fitting it into a standard mold. The act also relies heavily on tribes using their grant funds in combination with other funding and leveraging their funds to make the outcome more productive. The Apaches are a golden example of the intent of this Act."

PHOTOGRAPHS of the construction which began in the fall of 1998 may be seen below. These will be changed on a regular basis as the construction progresses. Current photos will be archived to our Elders pages as new ones are added. We invite you to check back often!

The Housing Authority is making a name for itself in cyberspace, too. Visit them at their website, located at http://www.apachehousing.org to get an idea of the other projects it has on the boards, as well as some of the awards it has won. One of the latter is recognition by the National Housing Institute as "Community Development Site of the Month" for the month of June, 1998. As such, the site will be featured in the Institute's magazine "Shelterforce" as an excellent on- line resource for housing and development professionals.

Entertainment was provided by the American Indian Music and Dance Show featuring Indian Music and Dancing by Kiowa/Comanche dancers and electrifying Blues Music by Tom Ware and the Blues Nation Band, also the Southern Plains Sign Language Assembly - Youth from Apache, Oklahoma
Please visit our Elders pages for earlier photos than those below.

Click on the tepee and send us email with your questions!